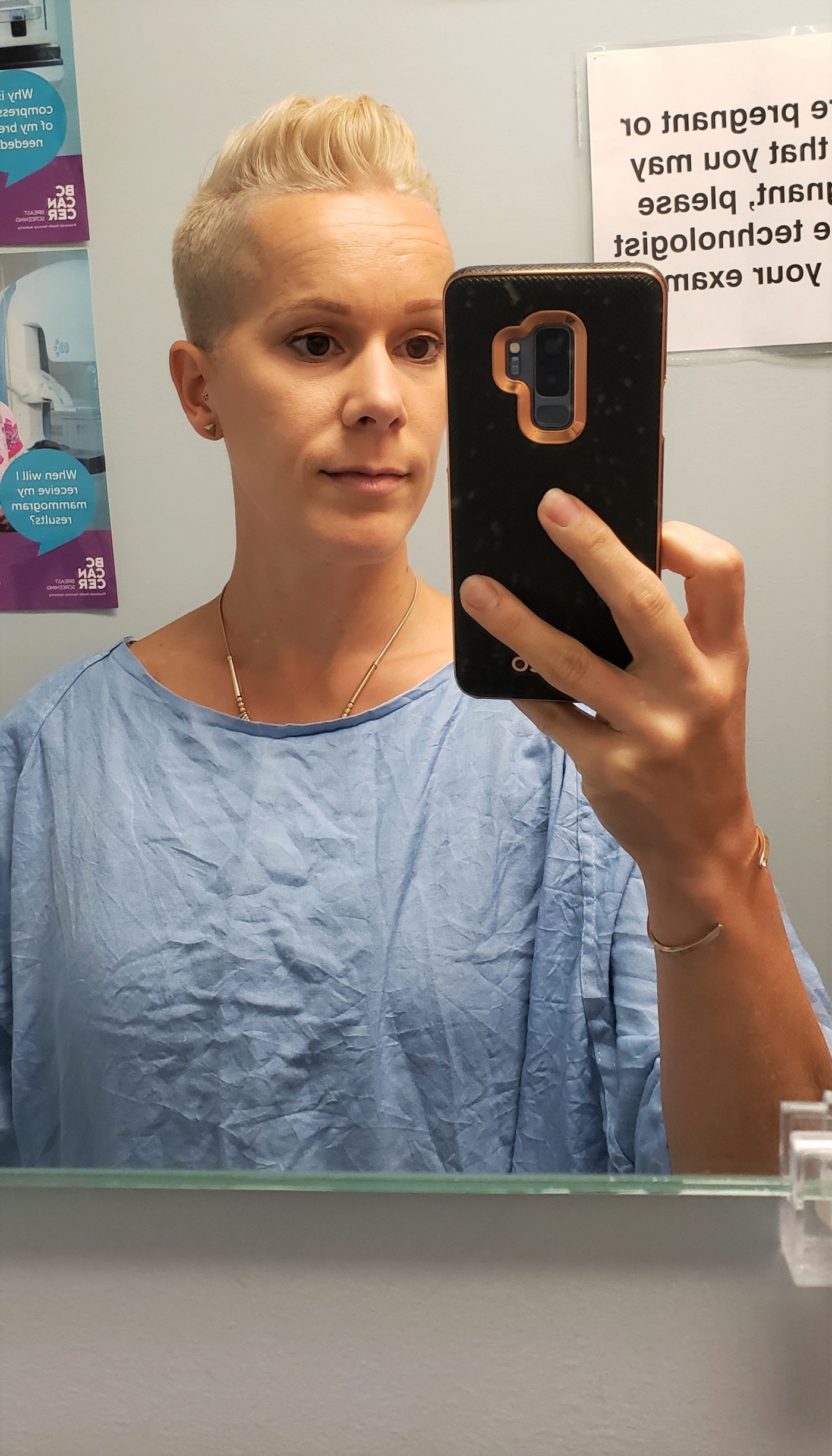 Sometimes I find myself holding my breath. My subconscious waiting for this bad dream to all be over. And then I come back to reality again and realize I’m still here, that cloud of uncertainty looming over my head as I head in for another scan wondering is this the time?

Back at the hospital I go through the motions: gowning up, the poke of a needle, the cold hard feel of the imaging table. I feel the barrel of the gun whizzing through my head, a game of Russian roulette. Will I get lucky this time? It’s a weird place to be in. We’re told to move on from cancer. To leave it all behind. You beat it, you’re cancer free! But cancer haunts you. Every new ache and pain seems much less innocent and so much more sinister. Trying to discern between whether it’s something to worry about or just another lingering side effect of chemo, radiation, and hormone therapy.

I’ve been having hip pain for about 9 months now. I was told it was bursitis, an inflamed tendon likely and was brushed away wondering now whether I was just overreacting about the whole thing. But something just hasn’t felt right. My doctor went through the process of ordering an x-ray, then an ultrasound and I found myself at each appointment, scanning the technician’s face trying to get some idea of what they were seeing on the screen. Uh oh – they clicked on something, they’re checking my other hip now, something must not be right! And there it goes, my mind down the rabbit hole again…

I went in for my first bone scan three years ago just as I was beginning my first round of chemo. I was terrified, the not knowing, the waiting and worrying whether things would change from fighting through cancer to fighting for my life. It felt like this huge knot in my stomach. So when my oncologist told me he wanted to order another bone scan, I felt myself reliving those same emotions, PTSD rearing its head once again. I reminded myself that it would be a good thing, help give me peace of mind knowing it was all clear (hopefully). But as much as I want to know, it’s hard to accept the brutal thought of the unknown.

Part of the trouble with this disease is that you want to educate yourself, you want to have all of the information but in holding that information, you are also faced with the hard truths. And that can be really difficult to think about sometimes. The statistics looming over my head wondering on what side of the numbers I may fall. My life changing unexpectedly with the click of a button, a report holding my fate in its starkly typed notes. I often hear people say you could get hit by a car tomorrow, but when you are diagnosed with a life-threatening disease, it feels like you’re playing in traffic.

So now here I am, trying my best to not sit with these thoughts too long. Focusing instead on keeping the scanxiety at bay. And wanted to share with you all how I get through these times and what others have suggested to me along the way:

The waiting game is literally the worst. You wait to get an appointment, then wait some more to go in for the actual scan, and then wait again to see your doctor and find out the results. Ugh! There’s nothing like sitting at home with my brain on overdrive playing out every scenario in my head. It’s easy for our minds to go there. To go straight to the C word. And honestly, I sometimes feel like if I could measure my thoughts in terms of miles, I probably would’ve run about a thousand marathons by now. So I’ve been trying to keep my mind preoccupied as much as I can whether it’s hanging out with friends or family, reading a book, watching a funny show (currently watching Good Girls which is hilarious), writing, or going for a walk. Anything to get my mind out of the cancer gutter.

I’ve really had to work on this one. Letting go of the things I cannot change and relinquishing some of the control. I felt like I was in the prime of my life when I was diagnosed. I was busy travelling, crushing my career goals, staying active and healthy, and then cancer happened. My daily routine now consisting of treatments, scans, bloodwork, surgeries and appointments instead. Everything in my life put on pause as the torch was passed to my doctors, trailing along behind the light wondering where we were going next. But I tried to focus now on the things I could change and allow myself to give up some of that control. To preserve my energy when I was really going to need it most. Because if I didn’t, I was going to end up feeling even more powerless than before. Letting go doesn’t mean you’re giving up. It means you’re finding trust and acceptance within yourself to move forward.

Going in for scans and treatments can feel like such a negative experience: the anticipation leading up to it, the poking, the prodding, and then the crash of emotions afterwards. One of the things someone suggested to me recently was booking myself in for a treat after scans and putting a more positive spin on it. A massage, pedicure, or even just a nice warm bath to relax. It helps give you something to look forward to after the stress of going through this. Kind of like a little reward in a way for getting through all this shit and saying at the end of the day heck yes I deserve this!

Lastly though, it’s important to know that aside from trying to manage these feelings of scanxiety, it’s perfectly okay to not be okay all the time too. It’s not always about putting on a brave face and being the poster girl of positivity, but being able to have the courage to say, ya I’m really struggling right now. Honestly, there are some days where I just need to have a good cry, acknowledge the rollercoaster of emotions, and then swiftly crank on some 80s tunes and say not today cancer.

How do you cope with scanxiety?

Hey! My name is Kim and I live on Vancouver Island, BC. Shortly after my 34th birthday, I was diagnosed with ER/PR+ Her2- stage 2b breast cancer. I underwent a lumpectomy, followed by 8 rounds of dose dense AC+T chemo, and 28 treatments of radiation. Read more